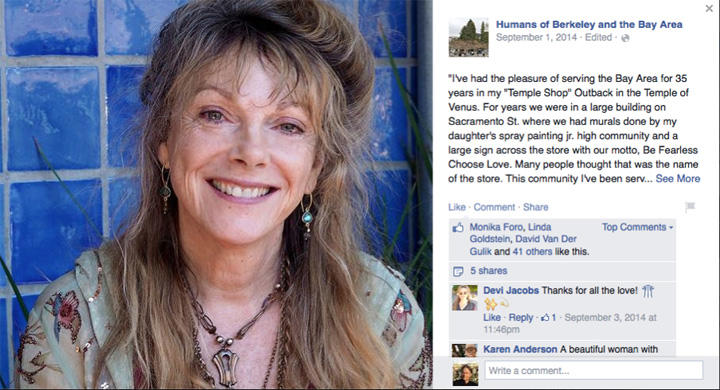 Humans of Berkeley and the Bay Area

“I’ve had the pleasure of serving the Bay Area for 35 years in my “Temple Shop” Outback in the Temple of Venus. For years we were in a large building on Sacramento St. where we had murals done by my daughter’s spray painting jr. high community and a large sign across the store with our motto, Be Fearless Choose Love. Many people thought that was the name of the store. This community I’ve been serving I call my “LoveTribe” and many have suggested calling our Temple Shop, LoveTribe. It used to be called Outback Adventurous clothing … for all the adventures of life. Many people thought that was confusing … sounded like backpacking gear. I’m Venus and clan mother, “Loves all things”, in an ancient women’s circle brought over from Eastern Europe by my “Goddess Mother” Norma Tringali (out of body for 13 years now). When I closed Outback in 2000, she said I would re-open as The Temple of Venus and would have all of these flowing robes. At the time I thought to myself, “That’s her, I’m a “sporty” girl”. But when I re-opened after 9/11 to do a “fear offset” action (I thought for only 2 weekends), all of these beautiful cut velvet floaty robes came my way and I thought, OK … Temple of Venus. I was shy about it at first … I didn’t want to sound “new agey”, so I said the Temple of Venus was our communal dressing room (where Venus would enter you), but eventually I came out (and now for the first time publicly with this story!).”

We offer special deals and sales to our Outback community.... Join our LoveTribe - connected by our passion for love, beauty and good deals!
SIGN UP FOR NEWSLETTER